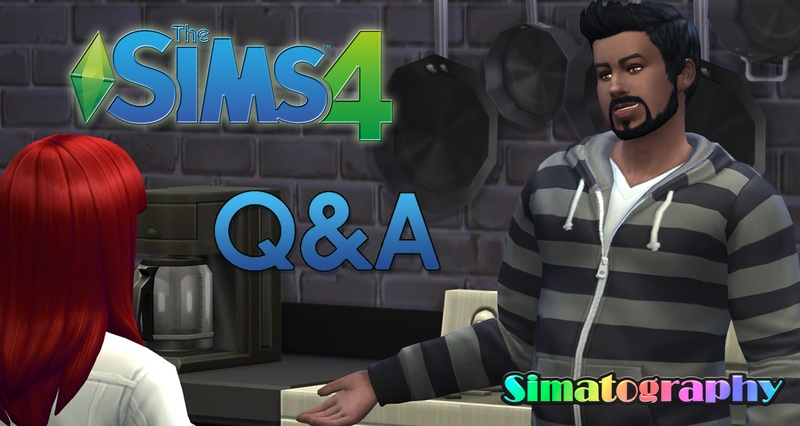 webs is being a bit buggy, so enjoy the banner for a while as I prepare the post

Q  Will buyable cars be available to use for machinima animations?

A  Not at this time in the base game. Because of the small neighbourhoods there is no functional need for cars, however, many people have expressed interest in having them as a buyable object. We don't know at this time if there is any behind the scenes plans to add them. However, for set set design purposes you might like to know that you can take a small toy car object and enlarge it with a cheat. James of The Sim Supply shared this photo as an example. Q  Will there be a way to control the emotions so that they fit into the scene we are trying to photograph or film?

A See my previous post on emotions HERE that gives a detailed explanation.

Q What type of cheats will be available to help us with our machinima and photo stories?

A There are some new cheats, some of the standard ones, and some that are missing (sadly).

Some of the cheats that are missing are a concern for us so I was able to express this to The Sims team of gurus. I was not the only one with these concerns, so many others said the same thing. I will forward a list of some of these concerns to my community manager to pass on for consideration. If they know that many people want to see these things, perhaps they will be able to include them. You can also count on modders to get their hands dirty with this stuff too.

Q Will there be a Fog Emitter and/or Spawners available?

A In the Sims 3 these came along later in EPs or patches. They were also added as a component of create a world / edit world options. In the Sims 4 there is no current option to edit off of the lot itself. So presumably these objects, meant for world and town editing, were not considered since this is not an option in The Sims 4 at this time. Hopefully something similar will come along at some point because, as many of us know, these are great for creating atmosphere and effects.

Q Will be be able to use hidden buy objects such as we do in The Sims 3 with BuyDebug?

A As far as I was able to tell this is not yet an option. In the Sims 3 it came along a bit later so hopefully this will be the case with The Sims 4 too.

Q Can you customize the neighbourhoods?

A At this time you can only customize the lots themselves, not the world or neighbourhood. For more info and thoughts on outdoor set design, check out my previous post HERE

Q Will the .ini files be accessible in the same way as The Sims 3 so that we can change lerp duration and other camera settings?

A Yes, and there will be some additional features available to modify there too. I will provide more information on this as soon as possible. I have the information, but it makes no sense to share it until we get our hands on the game and test it out. I don't want to share this freely without being absolutely certain that we are sharing it accurately as modifying these files can really destroy your game if you do something wrong. I have a master machinima maker on my team that will help me with this and as soon as we can we will share it as a machinima school lesson.

Q Will video capture file format be different? For example, will it be in a format that is compatible with Sony Vegas and other editors, because now it is not. Most of us find that we have to convert files captured in game through an editing system in order to make them compatible.

A I was not able to get a clear answer during my time there, however, I do have a contact person that I will reach out to for a discussion around this. I want to see what we discover in game first and what we can learn, then I'll bring forward several questions or concerns at one time.

Q Is the camera function improved or changed in anyway, for example low level drift etc?

A I apologize that I did not give this enough thought while I was there exploring. It was strange getting used to new camera mode feel and controls. There is the option for legacy camera or new camera control, so you can choose which you are more comfortable with, or you can easily toggle between the two for a variety of camera control options. I found this weird to get used to. For some reason, when I was there playing with the camera, I went blank when I tried to recall what the camera movements were like now. Duh. As soon as the game comes out, I will work with machinima makers to explore this and we will share our findings, recommendations and lessons.

One thing I did notice is that there is no function for rotation of the camera. I know that many of us like this for angled shots, rather than straight on shots. I thought of Titus Linde who likes to use this perspective often, like in this example. Many people gave feedback on this to the Sims team. I will add a more extensive post on camera functionality in the near future.

Q Can we access the animations list so that we can use them whenever we want for our machinimas or stories and photos?

A As there is no movie maker cheat yet available, there is no built in way to access the animations control panel to use them on demand. However, they are there, coded into the game files, so with a new animation player created we will be able to then plug in the game animations as well as any custom animations. While we will all be impatient waiting, we know that an animation player will come out before too long and as soon as that does, people will start extracting the game animation codes for us to use.

These are all of the questions I can think of, or that I have immediate answers to. I will still be making more posts with detailed information about various topics, but if you have any further questions I will ge answers if possible. If I don't know then I will as others who attended Creators' Camp or I will see if any Guru's are able to answer. You can comment here, but it is probably best to add to the forum conversation HERE

Oops, you forgot something.

The words you entered did not match the given text. Please try again.

Oops! This site has expired.

If you are the site owner, please renew your premium subscription or contact support.